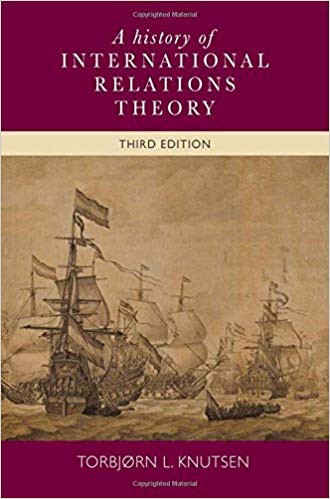 A history of International Relations Theory

This introduction to International Relations shows how discussions of war, wealth, peace and power stretch back well over 500 years. It traces international ideas from medieval times, through the modern ages up to the collapse of the Soviet empire. It shows how ancient ideas still affect the way we perceive world politics. This is the 3rd edition of an accessible and popular text. It introduces the ways theologians like Augustine and Aquinas wrestled with the nature of the state and laid down rules of war that are still in use. It shows how Renaissance humanists like Machiavelli and Bodin developed our secular understanding of state sovereignty. The book argues that contract philosophers like Hobbes, Locke and Rousseau introduced concepts that laid the basis for the scholarly field of International Relations, and that Enlightenment thinkers followed up with balance-of-power theories, perpetual-peace projects and visions of trade and peaceful interdependence. These classic international theories have been steadily refined by later thinkers by Marx, Mackinder and Morgenthau, by Waltz, Wallerstein and Wendt who laid the foundation for the contemporary science of International Relations (IR). The book places international arguments, perspectives, terms and theories in their proper historical setting. It traces the evolution of IR theory in context. It shows that core ideas and IR approaches have been shaped by major events and that they have often reflected the concerns of the Great Powers. Yet, it also makes clear that the most basic ideas in the field have remained remarkably constant over time.